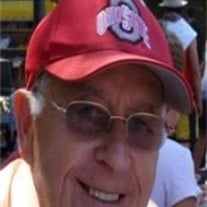 William Slabodnick, age 90, passed away on August 18, 2012. Survived by, sons David, his wife Michele, grandsons Stephen and Michael, his wife Levana of Columbus and son Robert, his wife Judy, of Ashland, OH, and grandsons Adam, his wife Kellie, Mark and his wife, Liz and Noah. In addition he has 2 great grandsons, Gavriel and Grayson, and step-grandchildren, Bobby, Bart, Jessica, Bret, and Billy Orth. He is survived by his sister Norma Wasserman of New Port Richy, FL and many nieces, nephews and friends. His wife, Ann, preceded him in death in 1991, and brother Harry, and sisters Ann, Bella, Lorretta, and Bea. Born on June 2, 1921 in New York, he moved to Boston, MA at the age of three. He graduated from Chelsea High School in 1940 and from the Massachusetts College of Pharmacy in 1943. Immediately upon graduation he was inducted into the U.S. army. He served in the European Theater of Operations as a pharmacist during WW II. Following the War, he continued his military service in the US Army Reserve. He retired from the Reserve as a Lt. Col. in 1975. His first civilian position was as a staff pharmacist and then chief pharmacist at Aultman Hospital in Canton Ohio in 1946. Two years later, he accepted a similar position at Massillon City Hospital (Ohio), becoming the Assistant Administrator the following year. He and Ann Marie Maddock were married in Boston in 1949. In 1955 he enrolled in the University of Chicago Graduate School of Business, receiving a MS degree in hospital administration in 1957. He returned to Massillon City Hospital, remaining there until 1958 when he became the Administrator of Fisher-Titus Memorial Hospital in Norwalk, Ohio. While there he opened what may be the first hospital owned, not for profit nursing home in Ohio. During his tenure at FTMH he served on the Board of Directors of the Ohio Hospital Association for eleven years, one year as its President. In 1970 he resigned to assume the position of Executive Vice President of the Ohio Hospital Association. He remained in that position until his retirement in 1987. Bill was a member of Beth Tikvah Congregation in Worthington, OH. Funeral service 11 a.m. on Sunday, August 19th at THE EPSTEIN MEMORIAL CHAPEL, 3232 E. Main St. with Rabbi Gary Huber and Rabbi Rick Kellner officiating. Burial will follow at Green Lawn Cemetery - Beth Tikvah Section. Shiva will be observed at the home of William Slabodnick Monday - Tuesday from 5-7pm. In lieu of flowers, donations are preferred to The American Cancer Society or Serenity House.

The family of William Slabodnick created this Life Tributes page to make it easy to share your memories.