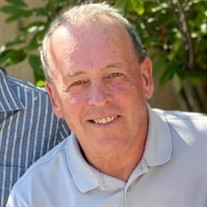 Tim A. Kauffman, 64, passed away unexpectedly at home on Sunday, May 30. Tim was preceded in death by his parents, Al and Mary Lou Kauffman. He is survived by his loving wife of 29 years Kari Cole Kauffman; sons Evan Kauffman (Hannah) and Jack Kauffman (Melissa); brother Doug Kauffman (Bernardo) and sister Debbie Fox (Ron); sister-in-law Charlene Scott (Gerel) and brother-in-law Brian Cole (Nancy); nieces Erin Fiorito (Joe) and Elizabeth Cole; nephews Jeremy Fox (Toria), Jordan Fox, Gregg Scott (Meredith) and David Scott (Jennifer); great niece Elizabeth Fiorito, and great nephews Luca Fiorito, Ethan Fox, Zach Scott, Nick Scott, Ethan Scott and Parker Scott. Tim was a lifelong resident of Columbus graduating from Eastmoor High School and earning a Bachelor of Science degree in Education from The Ohio State University. Tim was a world class athlete and excelled in baseball. He earned four varsity letters at OSU and received the Potter Runmaker Award for most valuable player both his freshman and senior years. He left OSU as the career leader in walks, hits, doubles, triples, and stolen bases. After Tim retired from baseball, he became a fast-pitch softball All-American and won several national team championships. One of his greatest achievements was winning a gold medal for Team USA at the Maccabi Games in Israel. Following in his father’s footsteps, The Jewish Center recognized his outstanding athletic career by inducting him into their Athletic Hall of Fame. Tim’s career spanned over 30 years in marketing and communications and included employment with Tourism Ohio, Greater Columbus Arts Council, Jewish Community Center and March of Dimes. His latest venture was with Destination Hilliard as the Executive Director, where he found tremendous pride and passion for the city he represented. Tim never lost his love of sports, and his competitiveness came out in his weekly golf games, coaching his boys (and never missing a game!), basketball, and poker. There was never a game he did not want to win. Tim cherished his time with lifelong friends on their annual golf trip. But most of all, Tim loved his wife, sons, and family and enjoyed spending time with them. A celebration of Tim’s life will be held at the Jewish Community Center, 1125 College Avenue, Columbus, OH 43209 at 2:00 pm. on Wednesday, June 2. Email [email protected] for a zoom link to Celebration of Live Service. In lieu of flowers, Tim’s family requests donations in his memory to The American Heart Association or the March of Dimes.

Tim A. Kauffman, 64, passed away unexpectedly at home on Sunday, May 30. Tim was preceded in death by his parents, Al and Mary Lou Kauffman. He is survived by his loving wife of 29 years Kari Cole Kauffman; sons Evan Kauffman (Hannah) and Jack... View Obituary & Service Information

The family of Tim Kauffman created this Life Tributes page to make it easy to share your memories.

Tim A. Kauffman, 64, passed away unexpectedly at home on Sunday,...