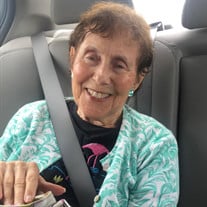 Passed away at home on August 13, 2021 after a long battle with Alzheimer’s surrounded by family and loved ones. Born in 1936, to Julius and Minnie (Haves) Teres of Cincinnati, Sandy arrived a few minutes after her identical twin sister Helen. The family moved to Dayton shortly thereafter. The twins enjoyed a close relationship with each other, with younger sister Flora, and their uncle Manuel Haves, who lived with the family for part of their childhood. Sandy was a proud graduate of Roosevelt High School where she was a class officer and earned scholarships to attend either The Ohio State University or The University of Cincinnati. She attended Ohio State where she majored in education, was a member of Alpha Epsilon Phi, and met her husband Alan Katz. After graduation, the two married and she taught second grade while her husband finished pharmacy school. Sandy was an active member of Temple Israel where she enjoyed being a member of the sisterhood. She enjoyed playing tennis, reading, mahjong, eating caramel apples, and attending to her beautiful garden. Her twin sister Helen was her lifelong best friend, marrying just a week apart, frequently visiting each other’s homes in Columbus and Dayton with children in tow, and talking by phone at least twice daily throughout their adult lives. She always saw the good in people and often championed the underdog. She was a loving mother, wife, grandmother, great-grandmother, and a friend to all. Her unrelentless determination drove her to start a stock club, where she was president and active member of for over 40 yrs. In addition to achieving many accolades and earning free trips oversees as a Discovery Toys Sales Representative, Sandy also won many blue ribbons at the Ohio State Fair in cooking and embroidery. Sandy befriended all she met with natural friendliness that put others at ease. While living at Creekside, she enjoyed meeting all new residents and making them feel special. During her life she fixed up eight successful couples that are still happily married. She is survived by her husband of 63 years, Alan, and their children Jody (Mike), Susan (Robert), Michele (Bill), grandchildren Moriah, Jason (Rory), Lindsey (Jake), great-grandchildren Ava, Lilia, Reyna, Ariella, and Zev. In addition, she is survived by sister Flora Russ, nephews Jeff and Dan (Bev) Jacobson and their families, and a host of friends, each of whom had a special place in her heart. A graveside service will be held at Green Lawn Cemetery, 1000 Greenlawn Ave, Columbus, on Monday August 16 at 1:00 pm. Donations may be made in Sandy’s memory to Zusman Hospice or your favorite charity. Funeral arrangements entrusted to Epstein Memorial Chapel. Email [email protected] for a zoom link to Sandra's graveside service.

Passed away at home on August 13, 2021 after a long battle with Alzheimer&#8217;s surrounded by family and loved ones. Born in 1936, to Julius and Minnie (Haves) Teres of Cincinnati, Sandy arrived a few minutes after her identical twin sister... View Obituary & Service Information

The family of Sandra Teres Katz created this Life Tributes page to make it easy to share your memories.