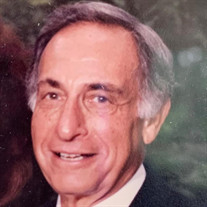 Robert S. Aronson of New Albany, Ohio and Palm Beach, Florida died peacefully at home on Monday, November 23, just after his 99th birthday. Bob was preceded in death by parents Mildred and Harvey Aronson, brother, Dr. Edward Aronson and his loving wife of 56 years, Joan Lubin Aronson. Survived by daughters, Cristine Aronson, Janie (Brad) Baskin, Lynne Aronson (Bill Schiffman), Laurie (Alan) Starr, sons, Andrew (Kris) Aronson and Bob (Patricia) Aronson; 9 grandchildren, Ian (Stacey) Holtum, Ashley (Osher) Perry, Bree (Joel) Goldstein, Ellie and Alizse Aronson, Josh (Brittany) Aronson, Zachary (Emily) Aronson, Daniel Aronson, Jacob Starr, and 4 great-grandchildren, Eden and Aviv Perry, Shale and Arden Goldstein. Bob was born in 1921 in Pittsburgh, PA. He graduated from Taylor Allderdice High School and Dickinson College. He received his law degree from the University of Pittsburgh. After serving in the U.S. Air Force as an Intelligence Officer during World War II, Bob entered into his family law practice in Pittsburgh. Bob married his first wife, Rosanne Resler, and moved to Columbus, Ohio where he became Executive Vice-President of the Hercules Trouser Company and established himself as a business person and leader in the community. In 1964 he married Joan Lubin of Pittsburgh and welcomed her children Lynne, Laurie and Bob to his family. At that time, Bob used his business and legal acumen to purchase and operate a company unique in the field of computerized transportation management. Bob sold ComTrac in 1986 and eventually retired. Always known for his intelligence and desire to expand his knowledge, Bob was a careful and thoughtful mentor, spending numerous hours listening to and guiding young people who often appeared before him in his role as mediator for the Palm Beach County court system. This position was one of pride and importance to him in his later life. Bob was a natural born leader, serving as Board President of numerous organizations including Goodwill Industries, Temple Israel, Jewish Family Services, the Leo Yassenoff Jewish Center, the Ohio State University Hillel, Winding Hollow Country Club, the Falls Country Club and Dickinson College Alumni Association. Reading, teaching, traveling, golf, tennis, and volunteerism were among his multitude of interests. Always open to hearing others, Bob loved participating in a weekly discussion group that encompassed different political ideologies. Bob adored his wife, Joanie; they had a happy and fun life, completed each other and built a strong family foundation. Well-read, accomplished and intelligent, Bob had a sense of humor equal to none. His self-deprecating wit (mostly memorialized by post-it notes, stored in his wallet) often allowed him to be the subject of the joke. Living to age 99, Bob touched so very many lives and was happy virtually all of his life. He was a force of nature and will be missed by all. The family is indebted to the care provided by the Hay Group; Rachael Ertel, Jennifer Bass, Charleen Naayers and Olivia Wilson; and for the care provided by Elizabeth Ricketts of Options Home Health. Private graveside services will be held at Forest Lawn on Friday, Nov 27 at 2:00 pm. The family will gather at a future date to celebrate Bob’s life. In lieu of flowers, contributions in his memory can be made to Temple Israel www.templeisrael.org or to any Jewish organization of choice. To see a recording of the service please follow this link: https://us02web.zoom.us/rec/share/yLpsOWQ4dSEL2oODHX5g2FO_bhrKuxROpMyd83XyomsbXTXHkpikfqVyfTKGnHsK.SXjsMUYi3f_hBRPD

The family of Robert S. Aronson created this Life Tributes page to make it easy to share your memories.