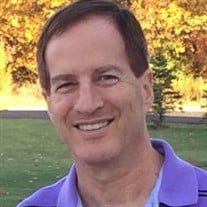 Randy Bank, born October 4, 1956 passed away May 31, 2020 in New Albany, OH after a lengthy and courageous battle with pancreatic cancer. Randy was born in New Haven, CT and shortly thereafter moved to Shaker Heights, OH where he grew up and graduated from Shaker Heights HS in 1975. Randy was the soccer captain at Shaker and was named All-Ohio 1st Team. He went on to Kenyon College, where he also served as soccer captain and earned his BA in 1979. Although Randy was a graduate from the Ohio State University Law School in 1984, Randy was a lifelong Penn State fan, following his parents, who met there. Randy was a Senior Partner at Bricker & Eckler LLC for close to 30 years, where he practiced Education and Employment Law. He was well respected and admired by countless long-term clients, co-workers, and friends. He was best known for his practical advice, superb analytical skills and casual, warm demeanor. Randy was an avid soccer player throughout his life. Oftentimes, he would bring his soccer bag to chemo and head to play soccer right from treatment. Randy played on many Columbus teams in both Dublin and New Albany, where he helped organize and captain teams for decades. He also loved the game of poker and his beloved poker pals. Randy was a movie buff, jazz fan, well read, and a wordsmith, enjoying a good game of Words with Friends in his free time. However, Randy’s greatest pride and joy was his beloved, 17 yr. old daughter, Hannah, and he loved nothing more than to watch her perform on stage. Randy was a loving and devoted husband to Ruth (Sanford) Bank and doting father to Hannah Bank. Randy is preceded in death by his mother Lea (Plessett) Bank. He is survived by his father, Malvin Bank, brothers, Jonathan Bank (Katie Firth), Douglas Bank (Susan), Steven Bank (Julie). He is additionally survived by in-laws, an aunt and uncle, many close cousins, nieces, nephews and dear friends. A Celebration of Life will be planned at a later date. In lieu of flowers, contributions may be made to Interlochen Center for the Arts, Randy Bank Memorial Fund, P.O. Box 199, Interlochen, MI 49643, www.interlochen.org/memorial, or The Pancreatic Cancer Action Network at www.pancan.org

Randy Bank, born October 4, 1956 passed away May 31, 2020 in New Albany, OH after a lengthy and courageous battle with pancreatic cancer. Randy was born in New Haven, CT and shortly thereafter moved to Shaker Heights, OH where he grew up and... View Obituary & Service Information

The family of Randy Bank created this Life Tributes page to make it easy to share your memories.