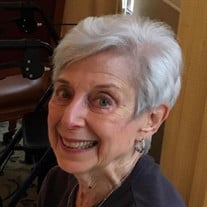 Nancy Levin Bergman passed away on August 2, 2020 at age 90. Nancy was born and raised in Philadelphia. She was one of three daughters, along with Millicent and Vilma, born to Rose and David Levin. Nancy graduated from West Philadelphia High School in January 1948 as vice president of her class. She received her B.S. in Art Education from Moore College of Art in 1952. She taught shop, mechanical drawing, and art at Narberth Elementary School and City Center Elementary School. She later became a fiber artist and showed her work in Philadelphia, Pittsburgh, Coral Gables, and Wilmington. Nancy met David Bergman on her 18th birthday on the first day of camp as counselors at the YMHA camp in Zieglersville, PA. They married 3 years later in 1951, and they had 3 children: Leah (now deceased), Drew, and Michael. After marrying David, Nancy moved to Center City Philadelphia. She was active in Center City neighborhood organizations, including serving as the first president of the Greenfield Elementary School Home and School Association. For over 25 years, she volunteered in the Costume and Textile department at the Philadelphia Museum of Art. Nancy enjoyed her summers with her family at a bungalow colony in the Poconos, and later at Long Beach Island, NJ. She loved to travel extensively in the United States and visited 88 countries from Point Barrow in Alaska to Antarctica in the south. Her favorite trips included a Palace on Wheels in India, Bali, the Greek Isles, and six trips to Israel to visit two nephews. Nancy was a vibrant woman, loving mother, and, in the words of her husband, the perfect wife. She is survived by David, her husband of 68 years, sons Drew and Michael, six grandchildren and two great-grandchildren. For the last year, Nancy lived in Columbus, Ohio near her son Drew. She loved Philadelphia, especially concerts, theater, and museums, and will be laid to rest there at West Laurel Hill cemetery in Bala Cynwyd. Contributions can be sent to the Philadelphia Museum of Art or to the charity of choice.

Nancy Levin Bergman passed away on August 2, 2020 at age 90. Nancy was born and raised in Philadelphia. She was one of three daughters, along with Millicent and Vilma, born to Rose and David Levin. Nancy graduated from West Philadelphia High... View Obituary & Service Information

The family of Nancy L. Bergman created this Life Tributes page to make it easy to share your memories.