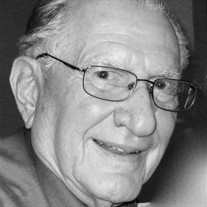 Michael B. Segal, age 94, passed away Nov. 12, 2016. Preceded in death by his parents, Michael and Elsye Segal; his first wife, Helane, son, Robert Segal, brothers, Walter and Arthur, his sister, Bessie Mae Younger, and grandson, Chase Harrison. He is survived by his wife of 36 years, Suzanne Segal; daughters, Barb (Marc) Goldenberg, Jane (Ken) Kershner; sons, David (Kathy) Segal and Miles (Carol) Harrison; daughter-in-law Alethea Segal; grandchildren, Natalie (Jared) Pruitt, Karen Winefordner, Jenny (Matt) Hay, Annie Catherine, Richard, Caroline Segal, Ben (Rachel), Sam (Stephanie), and Hannah Goldenberg, Alden Harrison and Ali, Will and Robin Kershner, as well as two great granddaughters, Reagan Pruitt and Eliza Hay. The Louisville, Ky.-native was in the Army and served in the 101st Airborne Division and was awarded two Silver Stars. He was very proud of his service and wore a World War II Veteran hat at all times during his later years. After an honorable discharge from war, the Kentucky Colonel worked as a salesman. In Louisville, he met the first love of his life, Helane Kuhn, and married in 1949. The couple started their family in Helane’s native Portsmouth, Ohio where he worked as a food broker and freelance journalist. Far too early, she was diagnosed with breast cancer and died in 1972. Dedicating his life to cancer research, Michael served as a volunteer State Crusade Chairman and national featured speaker for the American Cancer Society (ACS). He was later named the Executive Director of the Franklin County unit and moved his family to Columbus. Always the lucky man, he met the second love of his life, Suzanne, in 1978 and married in 1980. The couple loved to travel and will forever remember the trips and friends they made visiting Alaska, Australia, South Africa, Israel, Egypt and Europe, among others. Upon retirement, he was not one to slow. He began working with SCORE, helping small business owners expand their companies and taught basic business principles to inmates at Marysville Prison. He was also a dedicated volunteer at Mount Carmel East hospital in the surgery waiting room and loved to talk to anyone who would listen. The fundraiser extraordinaire raised money for ACS, Temple Beth Shalom, Shawnee State University and many other causes. His biggest source of pride was always his family. He loved all dearly and said he would grow up with his last grandchild. He was forever a playful man - constantly getting on the floor to play with Legos, even when his knees should have stopped him or have his nails painted by his granddaughters and brushing their hair. He loved passing on magic to his grandchildren, teaching many sleight of hand tricks and performing countless productions. Funeral services will be held at 11 a.m., Tuesday, Nov. 15, 2016 at Temple Beth Shalom, 5089 Johnstown Rd., New Albany. Burial will follow at Green Lawn Cemetery. The family will welcome friends to visit during and following Shiva services Tuesday from 6:30 to 9 p.m. at the home of David and Kathy Segal. The family asks that in lieu of flowers, donations be made to the Temple Beth Shalom or the American Cancer Society, Ohio division in his name.

The family of Michael B. Segal created this Life Tributes page to make it easy to share your memories.