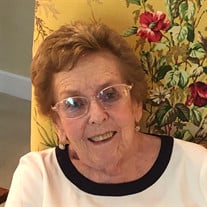 Marilyn Mintzes Skilken, loving wife and mother, died peacefully at home on Saturday, January 16, 2021. She was born on August 17, 1929, in White Plains, New York, but her family moved early in her life to Columbus, Ohio. It was there, at age 12, that she met the love of her life, Lee Skilken, and they were together ever since. They married on December 31, 1950, and were inseparable partners until Lee preceded Marilyn in death in 2010. Marilyn was a strong, modern woman. She graduated with honors from The Ohio State University and began a career as a teacher. She left that career to raise her daughters, but never lost her love of learning. That love made Marilyn an inveterate traveler; she and Lee traveled the world together, collecting wonderful experiences and friends along the way. But they always returned to Columbus, where their roots in the community were strong. Marilyn was a leader in the Jewish community, especially through Hadassah, the Federation, and Tifereth Israel Synagogue. Marilyn also was an avid sports fan and was particularly devoted to the Cincinnati Reds and The Ohio State Buckeyes — an indelible family memory is the Ohio State Alumni Band performing at her and Lee’s joint 80th birthday party. Marilyn’s greatest love, however, was her family. She was the proud mother of four daughters, and became known as beloved Safta to her seven grandchildren and four great-grandchildren. Marilyn was preceded in death by Lee, by her parents Samuel and Lillian Mintzes, and by her friend of 66 years, Sylvia Mellman. She will always be remembered in love by her four daughters, Tobi Skilken Gold, Rhea Skilken, Beth Skilken Catlett, and Carol Skilken; her two son-in-laws, Ken Gold and Steven Catlett; her grandchildren Michael Gold (Delia), Sarah Gold (Avi Allen), Isaac Gold, Samantha Catlett Gunning (Walker), Tessa Catlett, Benjamin Lavie, and Margot Lavie; and her great-grandchildren Jemma and Estelle Gold, Ford Lee Gunning, and Hugo Charlie Allen. Her life, and especially her last years, were enriched by the loving care she received from her long-time companion and friend Steve Colley, and from other loving caregivers. A private family graveside will be held at 2:00pm on Sunday, January 17th at New Tifereth Israel Cemetery. In lieu of flowers, contributions in Marilyn’s memory may be made to the charity of the donor's choice. To view a recording of the servie please follow this link: https://us02web.zoom.us/rec/share/4RB98QHi5qge27nqsNCAEQvH9yO-0TSlsbWlj6rlgp714MjBUYvHCkzLcy5QM0WR.wP0HSIA41NTSuJpi

Marilyn Mintzes Skilken, loving wife and mother, died peacefully at home on Saturday, January 16, 2021. She was born on August 17, 1929, in White Plains, New York, but her family moved early in her life to Columbus, Ohio. It was there, at... View Obituary & Service Information

The family of Marilyn Mintzes Skilken created this Life Tributes page to make it easy to share your memories.