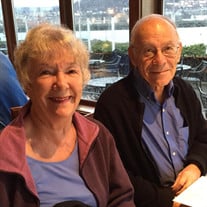 Lynn Friedman, teacher, political activist, beloved wife, mother, and grandmother, died peacefully at home on August 22, 2021, at the age of 88. Dr. Friedman earned her Ph.D. in Statistics from the University of Chicago at the age of 60. She authored studies on gender patterns in secondary and higher education STEM subjects. She taught mathematics and statistics at DePaul University, University of Minnesota, and the Ohio State University, among others. In 2020, She was elected to the Franklin County Democratic Central Committee. Lynn (her middle name) grew up in Evanston, Illinois, and graduated from Evanston Township High School in 1951, having excelled at academics and placed nationally in the sport of badminton. During World War II, her mother, Innes, joined the Chicago Health Department and rose to manage a division within it. At the end of the war, Innes reluctantly gave up her position, a blow that impacted the now-divorced Innes and her daughters, Lynn and her younger sister, Julie. Lynn went on to complete her B.A. at Mills College in Oakland, CA, then studied graduate-level math at the University of California, Berkeley, where she met her husband, Professor Avner Friedman (currently at OSU). He says she caught his eye when she earned the top grade in his class, but it took a particularly challenging bout of cat-sitting, on his part, for him to win her over. In 1962, Lynn and Avner moved back to her native Evanston and raised their family. Before marrying, Lynn converted to Reform Judaism. While she maintained a strong connection with her local family, hosting traditional family Christmas parties and conducting carols at the piano with practiced vocal harmony, she embraced her Jewish identity, joining local synagogues as she and Avner moved (for academic opportunities) from Evanston to Minneapolis to Columbus, Ohio. She, Avner, and their growing family spent Avner’s sabbaticals and vacations in Avner’s native Israel. In recent years, she and her husband joined the Congregation Tifereth Israel. Lynn was a reader, a talented pianist, a lifelong lover of classical and folk music, and an advocate for progressive causes, all of which she passed on to her four children. She organized against corporate personhood, fracking, and educational inequities. She campaigned on behalf of local politicians and gun control, and she was a faithful supporter of the independent Chicago bookstore, “Women and Children First,” in its early years. Lynn was delighted to learn recently that her great grandfather, former governor of Iowa, William Larrabee, published an 1893 book, The Railroad Question, that warned of unchecked corporate power. Lynn was preceded in death by her sister, Julie. She is survived by her husband, Avner; her four children Alissa (Victoria Herzog), Joel (Patricia), Naomi, and Tamara; her five grandchildren, Aaron, Joshua, Talia, Coriel, and Tobias. A graveside service will be held at 12:30 pm on Wednesday, August 25 at New Tifereth Israel Cemetery, 2565 Performance Way. For a link to the Zoom please email [email protected] In lieu of flowers, contributions in her memory may be made to the Mid-Ohio Food Bank or the League of Women Voters of Metropolitan Columbus. Online guest book at www.epsteinmemorial.com

Lynn Friedman, teacher, political activist, beloved wife, mother, and grandmother, died peacefully at home on August 22, 2021, at the age of 88. Dr. Friedman earned her Ph.D. in Statistics from the University of Chicago at the age of 60. She... View Obituary & Service Information

The family of Lynn Friedman created this Life Tributes page to make it easy to share your memories.