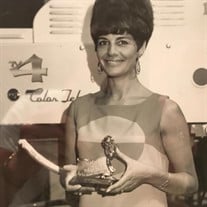 Joan L. Aronson, age 88, of Palm Beach, FL, passed away on May 10, 2020 in New Albany, OH after a courageous battle with pancreatic cancer. Preceded in death by parents Saul and Yetta Lubin. Survived by her loving husband of 56 years, Robert S. Aronson; daughters, Lynne Aronson (Bill Schiffman), Laurie (Alan) Starr, Jane (Brad) Baskin and Cris Aronson; sons, Bob (Patricia) Aronson and Andrew (Kris) Aronson; brother, Edward (Jean) Lubin; 9 grandchildren, Josh (Brittany) Aronson, Daniel and Zachary Aronson, Jacob Starr, Ian (Stacy) Holtum, Ashley (Osher) Perry, Bree (Joel) Goldstein, Ellie and Alizse Aronson and 4 great-grandchildren, Eden and Aviv Perry, Shale and Arden Goldstein. Joan was born in Pittsburgh, PA. She attended Carnegie Tech and then happily worked as an entertainer on television in Pittsburgh (KDKA) and then in Columbus (TV 4). She was known as Joanie Stuart, and was the co-host and singer on Channel 4’s Spook Beckman show and later co-hosted with Nick Clooney. Joanie brought joy to many fans during TV 4 productions at the Ohio State Fair. She loved music, singing, acting and dancing and one of her claims to fame was having Gene Kelly as her dance teacher growing up in Pittsburgh. Joanie was a member of Temple Israel for over 55 years. She starred as the lead in many musicals at the JCC with Gallery Players. Joanie won a local Channel 4 Emmy in 1966. Joanie was beautiful, vibrant, tons of fun, and always put together from head to toe. She loved her family, her many pets and of course her Ohio State Buckeyes. As a season ticket-holder she would brave snow, rain and heat to watch her beloved Buckeyes home and away. She was fortunate to be able to travel near and far for many bowl and National Championship Games. OSU T-Shirts were her gifts of choice. Her grandchildren and all babies were sent the most up to date Buckeye apparel. Joanie was an avid reader, a skilled tennis, golf and Mahjong player and the #1 fan of Judge Judy. Joanie was very outgoing, always talked to strangers and never shied away from bragging about her children or grandchildren’s accomplishments or sharing many a photo. Joanie was a force and will be missed by all. Private graveside services will be held at Forest Lawn - Temple Israel on Thursday, May 14, 2020. Shiva TBD. The family will gather at a future date to celebrate Joanie’s life. In lieu of flowers, contributions in her memory may be made to www.StoptheSuffering.org animal rescue or to charity of choice.

Joan L. Aronson, age 88, of Palm Beach, FL, passed away on May 10, 2020 in New Albany, OH after a courageous battle with pancreatic cancer. Preceded in death by parents Saul and Yetta Lubin. Survived by her loving husband of 56 years, Robert... View Obituary & Service Information

The family of Joan L. Aronson created this Life Tributes page to make it easy to share your memories.