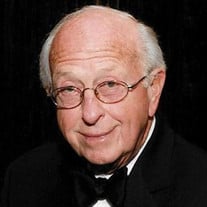 Jerome Hackman passed away Friday March 6, 2020 at the age of 94, beloved husband, father, grandfather, uncle, cousin and dear friend to many, Jerry was revered by all who knew him for his unique blend of intelligence, wit, honesty, integrity and loyalty. He was forged with a generous spirit and uncanny sense of humor. He loved life, and he made the most of his, as a fiercely independent, vibrant and active man. Above all, he was always passionate about his family. Born in 1925 in Columbus, Ohio, Jerome grew up in Bexley, Ohio and attended the Ohio State University. In the 1950s and 60s, he co-owned a family real estate brokerage company with his brother Marty and a construction company with his father Morris. From 1970 to 1994, he was the Director of Real Estate and Risk Management for Borden, Inc. He then became a real estate consultant for Hackman Capital Partners, a firm started by his son Michael in Los Angeles. Jerome was involved overseeing the company’s entry into the Columbus and adjacent markets. He managed the acquisition and disposition of more than $250 million of investment properties in this region. He continued to serve as a real estate consultant to Hackman Capital Partners up until his passing. Jerome was crazy about golf, art, politics and cars. He had a huge social life. He cared about his community. He adored his career, and he worked, because he wanted to, until he was 90 years old. Jerome is survived by his cherished wife, Linda Katz Hackman; six loving children, Audrey Hackman, Michael (Caroline) Hackman, Steven Hackman, Amy (Doug) Stefanko, Mia (Ralph Smith) Hackman; Eric (Jennifer) Wasserstrom; ten wonderful grandchildren, Justin & Gabrielle Hackman, Michael, Jessica and Robert Herwald, Chloe, Phoebe and Wendy Wasserstom and Keagan and Callie Stefanco; sister-in-law Lois Hackman and loving nieces, nephews, cousins and friends. He was preceded in death by his first wife Justine Hackman; parents, Morris & Anna Hackman; brothers, Jack (Francis) Hackman and Martin Hackman; sister, Ethel (Stanley) Novak; daughter, Cheri Wasserstrom. Funeral services will be held at 12:00pm on Sunday, March 8 at Epstein Memorial Chapel, 3232 E. Main St. Interment will follow at New Tifereth Israel Cemetery. Shiva will be observed at the Hackman residence on Sunday following the service until 8:00pm, Monday and Tuesday evenings from 5-8pm. Online guest book atwww.epsteinmemorial.com In lieu of flowers, please make donations in honor of Jerome Hackman at The Ohio State University James Cancer Hospital.

Jerome Hackman passed away Friday March 6, 2020 at the age of 94, beloved husband, father, grandfather, uncle, cousin and dear friend to many, Jerry was revered by all who knew him for his unique blend of intelligence, wit, honesty, integrity... View Obituary & Service Information

The family of Jerome Hackman created this Life Tributes page to make it easy to share your memories.