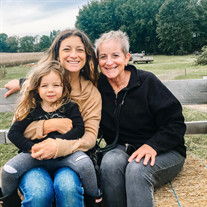 Marilyn Shafran got the biggest surprise of her life on June 24, 1950, when the then-21-year-old found out via an x-ray at the hospital that she was pregnant with not just one, but two babies. Both born with dark hair and bright brown eyes, Janice Susan Shafran beat out her twin, Joyce, by minutes. At the outset, Janice was a typical first-born child: practical, organized and reliable, and also the well-intentioned (if occasionally bossy) leader of Joyce and their younger sister, Carol. Janice grew up in Cleveland in a tight-knit community that included cousins living next door. The Shafran sisters often starred in and hosted plays, talent shows and other games on their back porch for an audience of friends and neighbors. While they were regularly confused for each other when wearing matching outfits, Janice and Joyce only engaged in twin trickery a few times, which may have been all they could get away with because their distinctive personalities set them apart. Life eventually pulled Janice to The Ohio State University and Columbus, where she was introduced to her beloved, Jack, by future brother-in-law Chuck Shenk. Lives ever entwined, the twins and their husbands all ultimately settled in Bexley. Eventually, though, Janice and Jack ventured to Minnetonka, Minnesota, for Jack’s work, and to build an idyllic life that centered on friends and adventure. Years later they came full-circle by returning to Bexley, where Janice relished the opportunity to re-kindle old friendships and forge so many new ones. After losing Jack in 2004, she moved to German Village and immersed herself in the community. Outside of family, Janice touched the lives of endless students and colleagues in her professional life as a JCC pre-school teacher, kindergarten teacher at Cassingham Elementary, and then private tutor. She stayed in regular touch with former students who were always eager to share with her the positive ways in which she impacted their lives. The love and respect she prioritized in the classroom nurtured people for far longer than a single school year. Volunteerism was also one of Janice’s callings. A regular at the German Village Society and an avid volunteer at Frank Fetch and Schiller Parks, Besa, and the Short North Theater, she awed the entire community, too, for a fierce commitment to raising money for the Jack Roth Fund benefitting The Ohio State University Comprehensive Cancer Center — Arthur G. James Cancer Hospital and Richard J. Solove Research Institute, and the Jack Roth Camp Netaim-Ramah Noam. Her long-time dedication to finding a solution instead of living in the problem culminated in a 2015 Women of Valor award. Whether it was students, family or friends, strength was the hallmark of the bonds Janice held. She used birthdays and anniversaries as one way to continue expressing affection for those with whom she kept in touch as well as others she once knew. Her uncanny way of connecting with others, and the sincere interest she took in their lives, was palpable. Janice gave much and expected little, and had too generous a spirit to pass judgment; she met people wherever they were at in life. Even on her most difficult of days, she trained her focus on listening to people tell their stories. When Janice wasn’t soaking up fresh air on her patio, she was out and about at art openings, plays, and seeing live music. She had an abiding passion for music, with ticket stubs from hundreds of concerts from up-and-coming singer-songwriters to some of the all-time greats. Above all else, Janice relished good talks with people she loved, and her loquaciousness was legendary in that she was impossible to drag away from almost any conversation. Whether acting as matchmaker for Maren (pre-Marc) or serving as the honorary press agent for Maren’s downtown Columbus boutique, Rowe, Janice was never too shy to start talking anywhere or to anyone. Janice was a bonus mom to her nieces (and a bonus grandma to her grand-nieces and –nephews), an easy favorite when it came to sleepovers, and a port in the storm when tough decisions needed to be made. As a duo, Janice and Joyce’s enduring passion for dance saw them jitterbugging well into their 60s, even if the consensus is that the music stopped far too soon. The last few years brought Janice vibrant days filled with concerts, volunteerism, and time spent with friends and family, especially her beloved granddaughter, Lennon, and sister Carol, who moved to Columbus after Janice’s diagnosis to keep each other hip and current on anything and everything. The highlight of the past half- decade was easily the marriage of Maren and Marc, and having Lennon bestow on her the great honor of becoming an official JaJa. When Janice passed away on Saturday, Oct. 5, 2019, following a Wonder Woman-like, epic battle with cancer, her loving family embraced her tightly. She leaves behind an unimpeachable mark from Columbus to Minnetonka and beyond. So many people from so many places grew to know, love and depend on her, and while the void in her wake is immeasurable, memories of her will endure, especially if everyone can endeavor to live like Janice. Janice was preceded in death by her adoring husband, Jack; father, Alvin Shafran; brother-in-law Ray Young; and grandnephew Max Shenk Genshaft. Her absence will be felt acutely, especially by daughter, Maren Roth (Marc Desrosiers); granddaughter Lennon Desrosiers-Roth; sisters Joyce Shenk (Chuck) and Carol Young; mother, Marilyn Shafran; loyal companion Kaptain the Teacup Persian; and a vast network of brothers- and sisters-in-law, nieces, nephews, grandnieces and –nephews, cousins, and dear friends. In lieu of flowers, please consider a donation to The Jack Roth Fund, a cause meaningful to Janice, Maren, and their entire family: The Jack Roth Fund, c/o the Columbus Jewish Foundation, 1175 College Avenue, Columbus, Ohio, 43209. A celebration of Janice’s life will be held on Sunday, November 10th from 2-5pm at Columbus Museum of Art, 480 E. Broad St. Columbus, OH 43215

Marilyn Shafran got the biggest surprise of her life on June 24, 1950, when the then-21-year-old found out via an x-ray at the hospital that she was pregnant with not just one, but two babies. Both born with dark hair and bright brown eyes,... View Obituary & Service Information

The family of Janice Roth created this Life Tributes page to make it easy to share your memories.

Marilyn Shafran got the biggest surprise of her life on June...