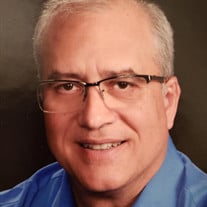 Jamie Zitesman, devoted father and husband died peacefully on Sunday, January 17, 2021. Jamie was born on October 24, 1960, in Springfield, OH, later moving to Columbus, Ohio with his mother and sister. It was there that Jamie attended Upper Arlington HS and saw the future love of his life. Several years later, they were introduced and after a long-distance romance, were married on Sept. 21, 1986. Jamie, a proud OSU Buckeye, completed his B.S.B.A. in 1982, and after spending several thrilling years working and skiing on Vail Mountain, CO., returned with Judy to Columbus OH to complete his Juris Doctorate degree at Capital Law School, graduating in 1993. Admitted to the Ohio and Federal Bar, Jamie pursued an impressive 27- year career as a sole practicing Attorney, representing clients in real estate transactions, litigation and business law. Jamie was a leader in his profession, with notable memberships in the Bar Association Real Property Committees, Columbus Board of Realtors author of numerous articles and publications, Jamie was a highly sought-after seminar speaker and professional awards recipient. A devoted Dublin resident Jamie served on the Muirfield Civic Association and later as a City of Dublin Board of Zoning Appeals Volunteer from 2012-2018. Jamie is preceded in death by his grandparents, Elick and Ida Zitsman, Alexander and Margarite Degan, father, William Zitsman, stepfather, Edgar Mansfield and infant daughter, Alexandra Zitesman. He will be remembered with love by his devoted wife, Judy, children Joseph and Jessica, his mother Connie Mansfield, brothers Rob, Howard and Chuck Zitsman and sister Karen Daves, and their families and children. He was a loving son- in- law to Judy’s parents, Anna and Zoltan Nemeth, and sister Edie and her family and children. A private family graveside service will be held at 11:00 AM on Wednesday, January 20th at Green Lawn Cemetery. In lieu of flowers, contributions in Jamie’s memory may be made to Congregation Beth Tikvah (www.bethtikvahcolumbus.org), Livnot U’Lehibanot (www.livnot.org), or a charity of your choice. To view a recording of the service please follow this link: https://us02web.zoom.us/rec/share/AEU9n1g-GF5R4r1LovXJh6XAcY5la4RIiAZFj3gJYkLzqdAS72VeUh1QbrCv6pnm.-TYfzkksEzhP6RBi

Jamie Zitesman, devoted father and husband died peacefully on Sunday, January 17, 2021. Jamie was born on October 24, 1960, in Springfield, OH, later moving to Columbus, Ohio with his mother and sister. It was there that Jamie attended Upper... View Obituary & Service Information

The family of James A. "Jamie" Zitesman created this Life Tributes page to make it easy to share your memories.