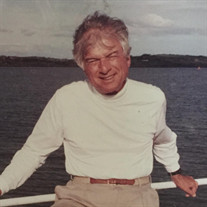 James Charles Jacobs, age 89, passed away on September 2, 2017, in Delray Beach, FL. He was surrounded by his 3 loving daughters. He was born on August 22, 1928, in Brooklyn, NY to the very proud Jesse and Ruth Jacobs. He graduated Cum Laude from Indiana University. He had a distinguished military career and graduated from the Officer’s Candidate School. He was in the Korean War in the Corp of Engineers. He earned the Korean service medal with 2 bronze stars, United Nations Service Medal and the National Defense Service Medal. He owned and operated Madison’s Inc., as the CEO until he retired 26 years ago. He worked tirelessly and created a wonderful life for his wife and children. Jim loved retirement and latched on with full enthusiasm as he played tennis and golf, read, became an accomplished painter, and spent time with his Joycie. The biggest love of his life was his wife Joyce. They were married for 64 years until her sudden death in 2015. He loved his 3 daughters passionately, with his fierce beliefs in honesty, integrity, hard work, and the importance of keeping your word. Jim resembled Rock Hudson, Cary Grant or any other man immensely gifted with great looks. His daughter’s friends swooned and fantasized regularly. Jim is survived by his daughters, Marianne Jacobs (Jay Brachfeld), Suzi Bone (Bill) and Nanci Jacobs Morris. He is also survived by his grandchildren, Scott Bone, Danny Morris (Katie), David Morris, Will Morris (Violeta), and Stevie Jacobs. He is also survived by his great-grandchildren, Connor Bone, and Natalie Morris. The Jacobs family express their heartfelt gratitude to Jim's caregivers who loved and adored him- Mimi, Al, V, Jeannique, and Annie. There will be a graveside service at Greenlawn Memorial gardens on Thursday, September 7, 2017 at 10:00 a.m. Shiva/Visitation will be observed at the home of Suzi and Bill Bone, 191 S. Chesterfield Road, Columbus, 43209 on Thursday and Friday from 1-3 p.m. and from 7-9 p.m. Donations can be also made to the Levis JCC Special Needs Department, Attention: Cindy Bergman, 9801 Donna Klein Boulevard, Boca Raton, FL. 33428.

The family of James C. Jacobs created this Life Tributes page to make it easy to share your memories.