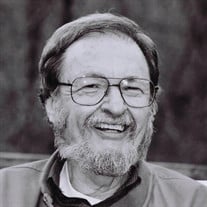 Herbert L. Mirels, age 83, passed away September 29, 2020 after a long battle with Parkinson’s disease and its complications. He was predeceased by his parents, Aline Bachursky Mirels and Stanley Mirels, immigrants from Poland, and survived by his devoted wife of 58 years, Ann Bernsohn Mirels; loving daughter, Aviva Frances Mirels Lauria (Mario); adored granddaughter, Sveva Lauria; as well as many proud cousins and dear friends. Herb attended New York University Uptown as an undergraduate. He received his master’s degree and doctorate in clinical psychology from Syracuse University, where he first met Ann and soon after married her. After and internship at Northwestern Medical School in Chicago, Herb and Ann moved to Columbus, Ohio, where Herb joined the faculty of the Ohio State University. He was promoted to the rank of full professor at Ohio State and served as the psychology department’s Director of Clinical Training for a number of years. Herb taught scores of undergraduates and supervised numerous graduate dissertations over the course of his almost 50-year tenure at OSU. He demanded a great deal from his graduate students – all of them can attest to that. But he was so proud of their accomplishments, and they were grateful, after all, for his unwavering insistence on excellence. Once having met Herb, it was hard to forget him. Caricature artists have commented on how easy he was to draw. There was the beard, of course, the glasses, the nose – that face practically drew itself. And then there was the N.Y. accent – still strong even after more than 50 years of living in Columbus. But it was Herb’s personality more than his outward appearance or N.Y. accent that stuck in people’s minds. He was witty, quick on the uptake, and funny with a quirky sense of humor and a deadpan delivery. He was often charming and lovable, but he could also drive a person to distraction with his extended explanations of abstract concepts, which he was sure interested his bleary-eyed audience. He was also fierce on the debate stage, where his articulateness served him particularly well. Even some of Herb’s close friends didn’t know of his talent in photography. There, too, he was unconventional. He saw things other overlooked – patterns in manhole covers and brick walls, the play of light on trash bins and mailboxes, architectural details, reflections in store windows, traffic lights, cranes, scaffolding, and demolition wreckage. Strangers almost never turned him down when he asked if he could take their picture. Something about the way he approached them won them over right away. Above all, Herb was scrupulously ethical and kind to everyone. All people counted with him – no matter their status or circumstances. He loved his family and friends dearly, but it was his daddy role that gave him the greatest pleasure. The bond with his daughter, Aviva, was extremely strong and endured for as long as he lived. Over a period of eight years, two remarkable caregivers – Suzanne Larger and Vickie Crenshaw – became a part of the Mirels family. The shared the family joys and sorrows and remained stalwart in their devotion to Herb even in the roughest of times. At some point they knew they were stuck with this crazy family forever, and we are so grateful. The staff at Whetstone Care Center, where Herb spent his final years, were not only skilled professionals, but empathic heroes. Nurse manager Jennifer and aides Rita and LaTania always had a smile for Herb, even when he couldn’t smile back. He was in good hands at Whetstone. A memorial service for Herb will be delayed until it is safe to gather. The family is hopeful that it will be soon. If you wish, please make a contribution in Herb’s name to the Central Ohio Parkinson’s Society www.guidestar.org or the charity of your choice.

Herbert L. Mirels, age 83, passed away September 29, 2020 after a long battle with Parkinson&#8217;s disease and its complications. He was predeceased by his parents, Aline Bachursky Mirels and Stanley Mirels, immigrants from Poland, and survived... View Obituary & Service Information

The family of Herbert Mirels created this Life Tributes page to make it easy to share your memories.