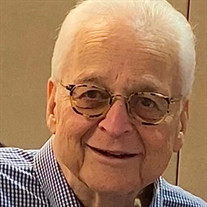 ﻿Frederick M. Luper, age 80, passed away on June 4, 2020. Fred Luper graduated from the Columbus Academy where he lettered in football and was a National Merit Finalist. He served on the Alumni Board for many years. He went to Cornell University where he majored in English and minored in theater. Acting was his joy and he shared his passion for theater with the love of his life. Fred met Carol Perlmuter at Cornell and it was love at first sight. He graduated and came home to go to The Ohio State College of Law. Carol transferred and enrolled at Ohio State University. They married and had Steven, Douglas and Betsy. He was so proud of his three children. Fred performed in community theater from the 1960's on . In 1986 He played the role of Ben Franklin in the Columbus Bar Association's performance of 1776. It remained one of his favorite roles! Through the years he became a supporter and Board member of Gallery Players at The Columbus Jewish Center. He also had a lifetime appointment as a member of the Jewish Center Board of Trustees. He created and produced the show "Legends of Gallery Players". He performed in many shows at Gallery Players, most recently in Funny Girl. He also performed at Actors Summer Theater, Weathervane Playhouse, and Hilliard Arts Council. For many years Fred and Carol spent several weekends in New York City, enjoying theater, restaurants and spending time with friends. Fred was a well-known and highly respected bankruptcy and reorganization lawyer, and a founding partner of the firm Luper Neidenthal and Logan. He was one of the longest serving Bankruptcy trustees in the United States. He served as President of The Commercial Law League of America in 1994 and spent several years on the organizations' Board of Trustees. His eight grandchildren brought him so much joy, and he loved attending their sporting events and concerts. He will be remembered for his sense of humor and his love of telling jokes. Preceded in death by his parents, Samuel and Eva Luper. He is survived by his wife of 55 years, Carol Luper; sons, Steven (Brenda) Luper and Douglas Luper; daughter, Betsy (Mark) Luper Schuster; grandchildren, Nathan (Ruth), Jessica, Abigail, Lainey, Michael, Ally and Eric; sister-in-law, Barbara (Wayne) Freid; niece, Cathryn (Kamryn Eddy) Freid; nephew, Matthew (Reanna OrRico) Freid; cousins and friends. Private graveside will be held on Sunday, June 7th at New Agudas Achim Cemetery. In lieu of flowers, contributions in Fred's memory may be made to The Columbus Jewish Community Center www.columbusjcc.org or charity of donor's choice. Online guestbook at www.epsteinmemorial.com

&#65279;Frederick M. Luper, age 80, passed away on June 4, 2020. Fred Luper graduated from the Columbus Academy where he lettered in football and was a National Merit Finalist. He served on the Alumni Board for many years. He went to Cornell... View Obituary & Service Information

The family of Frederick M. Luper created this Life Tributes page to make it easy to share your memories.