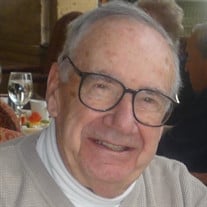 Ernest “Ernie” Stern, beloved husband, father, grandfather, great grandfather and dear friend, age 93, passed away peacefully on January 24, 2017. He was preceded in death by his wife Aurelia “Rela” Stern, parents Bert and Lilly Stern, and granddaughter Jessica Kass. He is survived by his loving family: daughters, Linda (Frank) Kass and Estelle (Terry) Rodgers; grandchildren, Alexandra Kass, Matthew (Nicole) Rubin, Brent (Suzanne) Lehring, Margot (Jamie) Lewis, David (Cari) Kass and Jonathan (Melissa) Kass; great grandchildren, Ellia Rubin, Robin and Jax Lehring, Jacob, Samuel and Aurelia Lewis, Leo and Carson Kass, Samantha and Jared Kass; and a large extended family and family of friends. His love for classical music, Weiner schnitzel and apple strudel can be traced to his boyhood years living in Vienna, from where he narrowly escaped in 1938 after the Nazis took control of Austria. Ernie arrived in this country at the age of fifteen with his parents, who chose to settle in Columbus because they thought it would present opportunities for them to become part of the mainstream of American life. He graduated from Central High School in 1940 and went on to The Ohio State University. Just after his junior year, in 1943, he was drafted into the U.S. Army, first enlisting, since he was a skier, in the 10th Mountain Division located at Camp Hale in west-central Colorado. He contracted rheumatic fever there and, because of his understanding of the German language and culture, was transferred to an infantry unit and placed into military intelligence school at Camp Ritchie in Hagerstown, Maryland. His unit was redeployed to a military camp in Manchester, England and assigned to the 63rd Division, with whom he remained throughout the war. From September of 1944 until April of 1945, Ernie was sent to a regimen in Paris during the time when Germans had infiltrated that city after the Battle of the Bulge. Reaching the level of staff sergeant, he assisted in the Alsace Mission, top-secret work involving the translation and analysis of captured papers on the German V-2 rocket, and helped locate installations at the Ziegfrid line, the defense line between Germany and France. For his war efforts, he received a Bronze Medal. After WWII, he returned to Ohio State on the GI Bill, graduating in 1947 with a business degree. He received a law degree in 1954 from Franklin University (Capital University Law School today) where he attended night school while working full time at Continental Office Supply. He became a partner and president of that company in 1951 following the death of the owner, Leo Eiferman. Ernie met his wife, Aurelia, in 1947, their first date going to Ohio State’s Hillel so she could translate documents. She was a young Polish émigré who survived the Holocaust by living underground. Their love affair lasted nearly 68-years, until her passing last May. Ernie was a life-long learner, a compassionate leader and advisor, a thoughtful philanthropist, and a man of great integrity and intellect whose support and influence is felt across the spectrum of the entire Columbus community. Always an active volunteer, he served as President of B’nai B’rith Lodge 62, of Ohio State Association of B’nai B’rith Lodges, and of both Temple Israel and Temple Israel Foundation, of the Columbus Jewish Federation. His varied leadership roles with Temple Israel, the Jewish Federation of Columbus, and the Columbus Jewish Foundation are too many to list. He was a member of the Columbus State Community College Development Board, a trustee of the Columbus Symphony Orchestra, treasurer of the Jewish Community Center, a member of the Grants Committee of United Way, a trustee of the United Hebrew College Congregations, and a board member of Wexner Heritage House. He participated or led fund raising activities for Capital University Law School, Columbus Jewish Federation, Columbus Jewish Foundation, Columbus Symphony Orchestra, Temple Israel, and United Way of Central Ohio, among other organizations, and continued to do so after he retired. He also provided mediation and arbitration services for the Franklin County Court and Columbus Bar Association upon his retirement, and volunteered for the Service Corps of Retired Executives. Among his numerous recognitions is the Endowment Achievement Award from the Council of Jewish Federations. In 2012, he and his wife, Aurelia, were honored for a lifetime of leadership and service to Temple Israel and the greater Central Ohio community. Funeral services will be held at 11:00am on Friday, January 27 at Temple Israel, 5419 E. Broad. St. Interment will follow at Forest Lawn – Temple Israel section. Shiva will be observed on Sunday evening at 7 pm at the home of Linda and Frank Kass. In lieu of flowers, donations are preferred to Temple Israel or Wexner Heritage Village.

The family of Ernest "Ernie" Stern created this Life Tributes page to make it easy to share your memories.