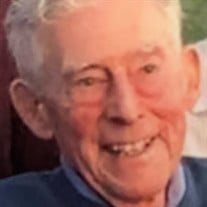 Elliott S. (Eddie) Grayson, age 96, passed away peacefully on December 19, 2020. He was preceded in death by his wife of 73 years, Pat; parents, Gertrude Schiff Harrison and Harry Greenberg; his brother, Howard (Ann) Grayson and his sister, Ruth (Richard) Arter. He is survived by his son, Michael Grayson; two daughters, Kathryn (Henry) Gorchoff and Julie (William) Karmia; grandchildren, Kim (Andrew Butt) Grayson, Jay Grayson, Robin (Nathan) Collins, Mallory Grayson, Peggy (Andy) Willhelm, Peter (Megan) Gorchoff, Betsy (Ryan) Holzapfel, Molly (Luke) Croak, Stephanie (Nate Strall)Rosenblum, Ross Rosenblum; Daughter-in-law, Deborah Grayson; Son-in-law, Robert Rosenblum; 12 Great Grandchildren (#13 on the way); Close friend Debra Cartt; nieces, nephews, cousins and life-long friends. After High School, Eddie enrolled at the Ohio State University and registered for the draft. He was drafted into the Army in 1943 as a member of the field artillery of the 87th Infantry Division. Promoted to Staff Sergeant, he saw action in Belgium at the Battle of the Bulge where he was wounded, and after four months in an English hospital he was returned to active duty. His division received orders to enter the Japanese war theater but the war ended before he was deployed. Eddie was honorably discharged from the Army in 1945 at which time he re-enrolled at OSU, graduating two and half years later. In 1947 he married Pat Gumble and joined his family’s business, Shoe Corporation of America (Schiff Shoes). Over the next 17 years he rose from store manager to the head of retail operations with responsibility for over 400 shoe stores nationwide. In 1964 Eddie left Shoe Corp. to go into business for himself. He took over the Columbus, Ohio Burger Chef franchise which consisted of two 15¢ Hamburger restaurants, subsequently opening six more units. In 1970, in partnership with his brother and Bernie Gros, he founded York Steak House. By 1977 York had created thousands of jobs in 47 steak houses throughout the Midwest and New England. General Mills bought the chain and in the next five years before his retirement, he oversaw the opening of another 100 restaurants in 30 states. In his own words, “from that time on my occupation was playing golf...probably 300 times a year,” but he always made himself available when anyone asked for his help or advice. Shortly before his death, a long-time associate wrote, “Eddie epitomizes ‘the Greatest Generation’, a war hero who came back to create a business and lead a successful career. He was so generous, not only with charities, but he would lend money and help to just about anyone. They simply do not make men like him anymore!” During his time on the board of ECDI (Economic Community Development Institute), Eddie was instrumental in the evolution of what is now known as The Elliott Grayson Culinary Institute -- a large commercial kitchen available for rent by food truck operators and others in the food industry. His greatest success by far, however, was the 73-year love affair with his wife, Pat who preceded him in death by only 17 days. Eddie was an early supporter of Heritage House and while there will be no formal service at this time, the family suggests memorial donations to The Columbus Jewish Federation, the Temple Israel Foundation or the Columbus Jewish Home for the Aged. The family also wishes to acknowledge the dedication and service of Grace Hospice, his nurses, Dale and Shayla, as well as his caregivers -- Patricia, Eurola, Yemi, Annie and Hamida -- who so lovingly cared for him in his final years.

Elliott S. (Eddie) Grayson, age 96, passed away peacefully on December 19, 2020. He was preceded in death by his wife of 73 years, Pat; parents, Gertrude Schiff Harrison and Harry Greenberg; his brother, Howard (Ann) Grayson and his sister,... View Obituary & Service Information

The family of Elliott S. (Eddie) Grayson created this Life Tributes page to make it easy to share your memories.