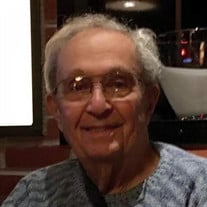 Edward Marion Hirsch, 89, born November 23, 1930 died December 21, 2019 in Columbus, Ohio. He leaves his beloved wife of 67 years, Joyce; his daughters, Pamela Hirsch (Frank Magnuson) and Robin Prosser (Paul); his sister, Miriam Goldmeier (Maynard); 2 grandchildren, Leslie LaRocca (Robert) and Daniel Kogan (Sarah); 3 great grandchildren, Elliott and Marina Kogan and Rose LaRocca along with numerous nieces, nephews and cousins. His parents, Dave and Sadie Hirsch, preceded him in death. Born and raised in Columbus, Ohio he was a longtime resident of Columbus and an avid golfing snowbird in Boynton Beach, Florida. He knew no strangers and was always striking up conversations with whomever he met. Eddie graduated from Bexley High School in the class of ‘49 and went to Ohio State University and participated in ROTC until he was drafted into the Marines in 1951. He was stationed in Edenton, NC where he made Sargent in 7 months and served on active duty for 2 years and in the reserves for another 6. It was during this time that he met the love of his life and married Joyce Okrent of Zanesville, Ohio in August of 1952. After serving in the military he returned to Columbus. Here he managed Sun TV and Appliances for 38.5 years; first as a general manager and television buyer, then Vice President and finally ending his career as Senior Vice President of real estate. He took great pride in his work and relished all the friends he made while doing business. Besides work, his family was his greatest and proudest joy. Funeral services will be held at 1:00pm on Monday, December 23 at Epstein Memorial Chapel, 3232 E. Main St. Interment will follow at New Tifereth Israel Cemetery. Shiva will be observed at the Hirsch residence. To honor his memory, donations may be made to Congregation Tifereth Israel www.tiferethisrael.org or the charity of your choice in lieu of flowers.

The family of Edward M. Hirsch created this Life Tributes page to make it easy to share your memories.