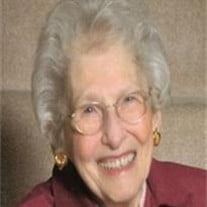 Dorothy Garson, 89, a resident of Columbus for the past 44 years, died Tuesday after a short illness. Funeral services will be held at 3 PM on Wednesday, November 17, 2010 at THE EPSTEIN MEMORIAL CHAPEL, 3232 E. Main Street, with Rabbi Michael Ungar officiating. Additional services will be held in Lincoln, NE with burial at Mt. Carmel Cemetery there. Mrs. Garson was a member of Tifereth Israel Synagogue, where she served as treasurer of the gift shop for 30 years. She also was a member of Hadassah. She enjoyed bowling and playing mah jong with her many friends in Columbus. She was born Dec. 25, 1920 in Mglin, Russia and immigrated to the United States with family members at age 2. She grew up in Omaha, NE, where she graduated from Omaha Central High School and attended the University of Omaha. She moved to Lincoln in 1943 after her marriage to Sam Garson. In Lincoln she was an active member of the Jewish community, including Tifereth Israel Synagogue, president of Tifereth Israel Sisterhood and a member of Hadassah. She and her husband moved to St. Joseph, MO in 1963, followed by moves to Castalia, OH and Columbus in 1966. She is survived by her son, Arnold Garson (Lynne) of Louisville, KY, four grandchildren, Scott Garson (Becky) of Columbia, MO, Chris Garson of Iowa City, IA, Gillian O’Hara (Kelly) of Omaha, NE, and Megan Hieronymus (Jason) of Hills IA; also seven great-grandchildren, Naomi Garson, Levin Garson, Isabel Cody, Sophie O’Hara, Jack O’Hara, Sabin Hieronymus and Cymry Hieronymus. She was preceded in death by her husband, Sam Garson.

Dorothy Garson, 89, a resident of Columbus for the past 44 years, died Tuesday after a short illness. Funeral services will be held at 3 PM on Wednesday, November 17, 2010 at THE EPSTEIN MEMORIAL CHAPEL, 3232 E. Main Street,... View Obituary & Service Information

The family of Dorothy Garson created this Life Tributes page to make it easy to share your memories.