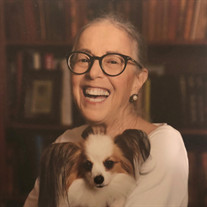 Donna J. Wasserstrom,nee Friedman, age 74, passed away on February 10, 2019 in Scottsdale, AZ. Preceded in death by her parents, Richard and Charlotte Friedman and brother, Jim Friedman. She is survived by her husband, Rodney Wasserstrom; son, Brad (Julie) Wasserstrom; daughter, Kelli (Jeff) Gellis; grandchildren, Chelsea and Emily Wasserstrom, Sophie and Mia Gellis; very special aunt, Eunice Schiffman; many special nieces, nephews, cousins, in-laws, friends, and her dog Belle. Donna was born in Cleveland, Ohio and graduated from Shaker Heights High School in 1962. She graduated from The Ohio State University in 1966 with a Bachelor of Science degree in Social Work. She was recruited by the F & R Lazarus Co. to merchandise the window displays of their downtown flagship store. In 1968, Donna met Rodney and they celebrated their engagement that autumn at the Ohio State-Purdue game, marrying in January 1969. Donna worked for the National Kidney Foundation as Director of Development in the Columbus office for years before leaving to co-create Plant Parenthood, a business for home plant parties. Creating art was Donna's true passion. With her business acumen and artistic talent she went on to create Shibui, one-of-a-kind, beaded pieces of wearable art. Donna created these purses and jackets by hand applying 12 to 18,000 glass beads on leather with one very unique antique "embellishment" selected especially for each piece. While her pieces were worn by many friends and family, they were also purchased through a handful of galleries and boutiques nationwide. Donna had a love and appreciation for antiques and collectibles and found a particular passion for Bakelite jewelry and accessories. She built her collection traveling the world, and became well known through her extensive network of antique dealers and through the book she co-authored on the subject. In 1998 Donna began collecting American made antique quilts. Several years and 500 quilts later, Donna needed a new home for her collection and chose to donate most of them to the Columbus Museum of Art. Throughout Donna's lifetime, she had many varied collections ranging from folk art, midcentury glassware, textiles, and southwestern art. Donna made many lifelong friends through her years of collecting, and enjoyed spending her time collecting with her dear husband Rodney. They just celebrated their 50th wedding anniversary. Funeral services will be held at 10:00 am on Thursday, February 14 at Epstein Memorial Chapel, 3232 E. Main St. Interment will follow at Old Tifereth Israel Cemetery. Shiva will be observed at the Wasserstrom home on Thursday from 5 to 8:30 pm, with services at 7. Friday from 2 to 5 pm and Sunday from 3 to 7 pm with services at 5:30. In lieu of flowers, donations are preferred to the Columbus chapter of the Crohns and Colitis Foundation or Children's and Family Programming at The Columbus Museum of Art.

Donna J. Wasserstrom,nee Friedman, age 74, passed away on February 10, 2019 in Scottsdale, AZ. Preceded in death by her parents, Richard and Charlotte Friedman and brother, Jim Friedman. She is survived by her husband, Rodney Wasserstrom; son,... View Obituary & Service Information

The family of Donna J. Wasserstrom created this Life Tributes page to make it easy to share your memories.