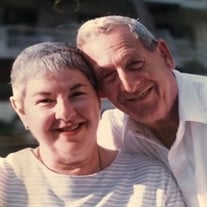 Daniel David Wagner died at the age of 91 on Wednesday, August 19, 2020. He was preceded in death by his beloved wife of 44 years, Corrine Ruth Wagner. Devoted husband, father, grandfather, community volunteer and long-time friend of many, he will be dearly missed by all who loved him. Born Daniel David Wagenheim in Brooklyn, New York on St. Patrick’s Day, March 17, 1929, Daniel was a talented violinist who as a teen spent his summers in the Catskills as an entertainer for vacationing families. After graduating from high school shortly after the end of WWII, he enlisted in the National Guard, from which he was honorably discharged. In 1952, Daniel legally changed his last name to Wagner, because he had been teased as a child in school over his birth name, and he wanted to spare his children that same experience. He spent his early adult life on Long Island, making the first part of his career in home building. However, Daniel spent the bulk of his career in property management, which he truly loved. He moved to Columbus, Ohio in the 1970s and married Corrine on March 16, 1975. They were the loves of each other’s lives. Daniel was a positive, upbeat person who adored making others laugh. He was known for his infectious smile and twinkle in his eyes. He was notorious for telling corny jokes; he tortured many restaurant servers by telling them when they brought the bill “my name is crime, and crime does not pay.” Daniel especially enjoyed golf, music (especially opera and piano concertos), theater and travel. His friendships spanned both Columbus and Florida, where he and Corrine spent winters socializing with their wide circle of cherished friends, and taking in the local concert and theater offerings. Daniel volunteered for decades for the Columbus Symphony Orchestra and for Mount Carmel East Hospital. While other members of his family certainly felt the warmth of his love, his grandchildren were the apples of his eye and he was an incredibly engaged, loving, fun and supportive grandfather; in the final analysis, grandfather was his starring family role. Daniel is survived by his children Warren Wagner (Shari) of Phoenix, Arizona; Stephanie Tuthill (Bill) of Denver, Colorado; Carolyn Sigall (Juvenal Diaz) of Whittier, California; and Rosalie Harrison (Clark) of Laglio, Italy; and his grandchildren, Cristobal Diaz, Zachary Tuthill, Candice Tuthill, Alexander Harrison and Carly Harrison. A private family graveside service will be held at New Tifereth Israel Cemetery.

Daniel David Wagner died at the age of 91 on Wednesday, August 19, 2020. He was preceded in death by his beloved wife of 44 years, Corrine Ruth Wagner. Devoted husband, father, grandfather, community volunteer and long-time friend of many, he... View Obituary & Service Information

The family of Daniel David Wagner created this Life Tributes page to make it easy to share your memories.

Daniel David Wagner died at the age of 91 on Wednesday, August...