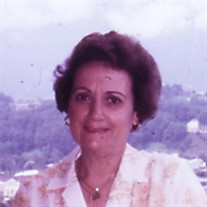 Celine S. Douek, age 92, passed away on July 7, 2020. Preceded in death by her husband, Mourad Douek; parents, Baruch and Rose Salem; brothers, Henri Salem and David Salem; sister, Emma Dentes. She is survived by her sons, Maurice (June) Douek and Andre (Lisa) Douek; daughter, Danielle (Ephi) Zouela; grandchildren; great grand-children, many nieces, nephews and cousins.Having fled Jewish persecution in Egypt she came to Columbus with Mourad, her husband, in 1964 with 3 small children to start a new life. Although she had a large family in Egypt, her extended family scattered to France, Italy and Israel while she and Mourad settled in Columbus. The early years were particularly hard for her as she worked to help support the family for the first time in her life. She was employed in the Periodical Department at the Main Library of The Ohio State University where she worked for 22 years and developed many friends and acquaintances. Her life’s focus was always the family, her husband and the welfare of her children, raising them in a moral and Jewish manner while teaching them timeless values: honesty, integrity and care for one another. She belonged to the Agudas Achim synagogue from the day she arrived to Columbus until her retirement in 1989 when she moved out of state. She taught the Sephardic traditions and Egyptian cooking, particularly, to her children and, later, to her grandchildren. She was an elegant , charming lady who was loved by anyone who knew her. She left an indelible mark in the lives of her family because she was the anchor of that family. A private graveside service will be held on Wednesday, July 8th at New Agudas Achim Cemetery. In lieu of flowers, contributions in her memory may be made to the Alzheimer’s Association or Congregation Agudas Achim.

The family of Celine S. Douek created this Life Tributes page to make it easy to share your memories.