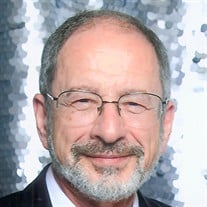 Humorist, physician, dentist, philosopher, and punster, Dr. Aryeh Gorenstein, age 71, passed away on November 29th. While fighting a horrific cancer, he found the strength to keep everyone around him smiling and laughing. Aryeh was the first Jewish baby born in Haifa in the new state of Israel in 1948. His family moved to Winnipeg, Manitoba when he was 5 years old. Aryeh was educated at the Talmud Torah where he learned his love of Judaism and Jewish tradition. He graduated high school at 16 and dental school at 21. He used his earnings as a dentist to put himself through medical school, earn a Masters of Science and complete his specialty medical training at the Mayo Clinic. Throughout his career, he specialized in head and neck, ear, nose and throat and in facial cosmetic surgery. His passion for helping people expanded beyond private practice and drove him to help train future doctors as a medical professor at multiple schools including the Ohio State University. An avid historian who placed a lot of value on loyalty and service, Aryeh spent the last few years practicing medicine at the Veterans Administration in Columbus, where he cherished the stories of the veterans that he treated. In addition to traditional medicine, Aryeh believed that laughter brings joy to the body and soul. He provided care to his patients until the day he received his own diagnosis and continued to deliver laughter to his caregivers and family until he passed. Aryeh was also an artist. His talent for capturing the beauty of the world through his camera lens led to a second career as a photographer. He traveled the world to capture the beautiful photographs that he displayed and sold at numerous art festivals throughout the state of Ohio. As a humorist, Aryeh self published several riddle books which delighted many of all ages. He brightened every room with his wit and humor. Aryeh was preceded in death by his parents, Sam and Ida Gorenstein. He is survived by his wife, Marci Gorenstein; son, Michael Gorenstein; daughter, Mandi Gorenstein and sister, Essia Kaufmann as well as friends, family and patients who will honor his memory. Funeral services will be held at 3:00 pm on Sunday, December 1st at Epstein Memorial Chapel, 3232 E. Main St. Interment will follow at New Beth Jacob Cemetery. Shiva will be observed at the Gorenstein residence from 1:00pm to 3:00 pm and 6:30pm to 9:00 pm Monday through Thursday. Donations in memory of Aryeh, may be made online to the Gesundheit! Institute www.patchadams.org to carry on Aryeh's legacy of healing and humor.

Humorist, physician, dentist, philosopher, and punster, Dr. Aryeh Gorenstein, age 71, passed away on November 29th. While fighting a horrific cancer, he found the strength to keep everyone around him smiling and laughing. Aryeh was the first... View Obituary & Service Information

The family of Dr. Aryeh Gorenstein created this Life Tributes page to make it easy to share your memories.