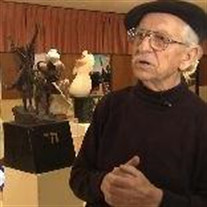 Alfred Arthur Tibor, age 97, passed away peacefully Saturday, March 18, 2017, at Sunrise Living Center of Bexley, surrounded by his family. Alfred was born in Konyar, Hungary. He lived through World War II and survived the Holocaust, three years as a Hungarian forced laborer and four years as a prisoner-of-war in the Soviet Gulag. In 1956, he emigrated to the U.S. during the Hungarian revolution, with his wife, two children and brother, Andrew. He settled in Miami, Florida, where he spent fifteen years as a commercial artist. In 1972, he moved to Columbus, Ohio, where he worked as a commercial artist and an advertising director for the Schottenstein family and Value City Corporation. In 1973, Alfred began a second career as a sculptor, which he continued successfully for over four decades. His name will be continually remembered through his public and private sculptures. His works can be seen throughout Columbus, in other cities across the country, and at Yad Vashem Holocaust Memorial in Jerusalem. Alfred was a dedicated artist and a loving husband, father, grandfather, and great grandfather. He will be deeply missed by his wife, Susan; daughter Eva and son-in-law Jay; son Thomas and daughter-in law Marie; grandchildren Simone and husband Josh, Michelle, Ari, Elliott, and Julia; and great grandson Jack Summer. A funeral service will be held Monday, March 20th, at 1:30 PM, at Congregation Agudas Achim, 2767 E. Broad St. Shiva will be observed at the Tibor home Monday following the service and Tuesday through Thursday at 7 PM.

The family of Alfred A. Tibor created this Life Tributes page to make it easy to share your memories.