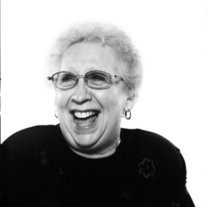 Adele G. Benjamin, age 77, passed away on June 11, 2013. Preceded in death by her parents, Joseph and Katie Goldman; brothers, Morrey Goldman and Sandy (Jeanne) Goldman. She is survived by her sons, Joel (Dan Norman) Benjamin, Randall (Brenda) Benjamin and Michael (Samantha Mandor) Benjamin; dear friend, Daniel Schleppi; sister, Shirley Hoffman; grandchildren, Emily, Lucas and Matthew Benjamin; sister-in-law, Lois Goldman; nieces and nephews. Adele graduated East High School in 1953. For many years, she lived in Miami, Florida, where she raised her three boys and worked as a store manager. She moved back to Columbus, Ohio, where she was born, in 1985. She worked as a manager at Lazarus, Kids-R-Us and other stores, and then spent 11 years as a secretary for Discover Card. She loved doing needle-point and reading, and few things made her happier than to win at mah-jong. She fought a courageous battle with Parkinson's disease and was a long-term cancer survivor. She lived her life with gratitude. It was a philosophy she passed on to her three sons, who feel so blessed to have had her in their lives. Adele had a positive outlook on life, and despite health set-backs, overcame them with grace and dignity. Most of all, she freely shared a warm love with many people, and especially her three sons, who consider her not only their mother, but their friend. A memorial service will be held at 11 am on Friday, June 21st at CREEKSIDE AT THE VILLAGE, 2200 Welcome Pl. with Rabbi Deborah Lefton officiating. The family will receive friends following the service at Creekside at the Village. In lieu of flowers, donations are preferred to Zusman Hospice, www.whv.org/Give in her memory.

The family of Adele G. Benjamin created this Life Tributes page to make it easy to share your memories.